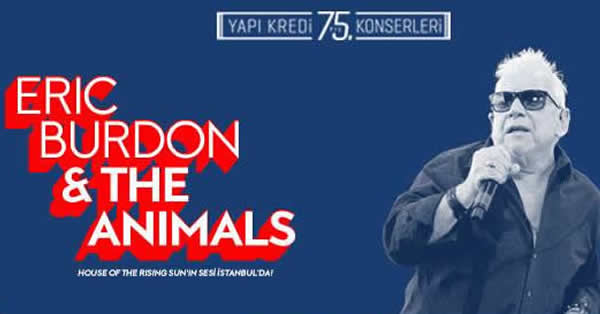 Eric Burdon & THE ANIMALS is going on a European Tour led by Eric Burdon, a member of Rock and Roll Hall of Fame, one of the most important and powerful sounds in the history of rock music. Burdon, The Beatles, The Rolling Stones, The Who, and The Kinks have become one of the most important figures with their group The Animals in the 60s English rock music movement, which has influenced the whole world. It was included in the list of 100 Best Sounds of Music History prepared by the famous magazine Rolling Stone in 2008. “The House of the Rising Sun”, “Baby Let Me Take You Home”, “I’m Crying”, “Boom Boom”, “Don’t Let Me Be Misunderstood”, “Bring It On Home to Me”, ” We Gotta Get out of This Place “,” It’s My Life “,” Don’t Bring Me Down “,” See See Rider “,” Monterey “and” Sky Pilot “sang songs to the heart of billions of people. . He recorded songs and performed with names such as Bon Jovi and Ringo Starr.

While Istanbul hosts one of the most important figures in rock history, be there to meet the living legend! Eric Burdon & THE ANIMALS at Volkswagen Arena on June 20!